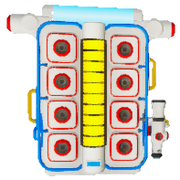 The Backpack is the main tool that the player has throughout Astroneer. It features a total of ten small attachment slots, with an additional three slots on the Terrain Tool, a printer, a handle to access the research catalog, a handle to access the mission log, a built-in oxygen canister, and a built-in battery for powering the printer or the Terrain Tool.

The various features of the backpack can be accessed by "opening" it, which makes it larger and easier to interact with. To open the backpack, press

on Switch, or to select it directly using the cursor

on PC or press

The backpack has 8 slots dedicated to resource and small item storage. Items can be placed into, removed from, and rearranged within these slots manually, but as long as there is an inventory slot available, resource nuggets collected with the deform tool or items created using the backpack's printer will be automatically placed there. If all inventory slots are full, newly created or collected items will drop to the ground nearby. To quickly put items into backpack slots,

on the item; on controllers, hover over the item with Xbox:

There are 2 additional slots on the top left and right of the backpack, which is meant for Widgets. These are commonly used to host items such as the Solar Panel, Worklight or Portable Oxygenator. Some widgets in these slots can be toggled on and off using the context keys (PC:

), such as the Worklight, Portable Oxygenator or Small Generator. Like other attachment points, however, they can also be fitted with resource stacks or other small items for additional storage.

or clicking the handle on the left side of the backpack will open the research catalog, where player can purchase Schematics using accumulated Bytes. The catalog is separated into 4 different size categories, corresponding to the four sizes of objects created by the corresponding printers. The context keys (default PC:

) can be used to move around those categories.

The movement keys can be used to move around a category, and the Context Left/Right keys to change categories. Alternatively, the buttons and schematics can be clicked on to move to categories or different items.

Clicking the handle on the right of the backpack brings up the Mission Log. This allows to check missions, track them, and claim Byte Rewards for completed missions.

Using the small printer on the Backpack, items can be crafted on the go at the cost of 3 Units of Power. Cycling through the available items will automatically move the appropriate resource to the printer's input slot if it is already in the backpack. This input slot can be used to deliberately store a specific extra resource, if so desired, but be forewarned that changing the item to be printed will eject the contents of the input slot from the backpack if the rest of its inventory slots are already full.