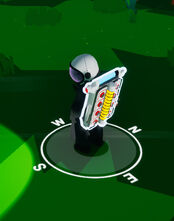 It is a common problem, even for hardened astroneers, to get lost exploring, or drive a vehicle somewhere and never be able to find it again after respawning. This here guide aims to provide you with some survival skills to hopefully make your next adventure a lot safer. 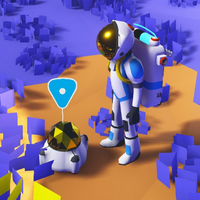 Hovering over your character will display one. Every time you drive away from your base, make a note of your headings and try to stick to that cardinal point. Use it often!

Quartz and, when placed, will put down a marker similar to the one the habitat uses. Tap "F" on it will allow users to cycle through many colors that can be assigned meaning.

Very helpful in the lower caves, which can be truly labyrinthic. It's particularly easy to get lost there if you're covering a lot of ground with a vehicle looking everywhere for those sweet discoveries. Use your Terrain Tool to create landmarks from the walls or ceiling as you go. Same applies to the overground, creating pillars at regular intervals will make it almost impossible to lose your way and they make a cheap alternative to beacons. You can also go a step further and place a more visible beacon on top, or even extrude a branch pointing towards home.

Mountains are your best friend when you've explored most of your immediate surroundings and want to venture further. Not only do they offer you great vantage points to survey the area if you climb to the top, they're also great landmarks you can use as waypoints as you travel away from your base. The top of a mountain is also a perfect spot to drop a beacon as it will be visible from very far away. Also a great opportunity for screenshots!

Even if the player's base is not located along the equator or near the poles, the player can still use the poles and the band of stars to their advantage. This technique involves leaving a Beacon breadcrumb trail to the closest pole. The player should check their compass (by hovering the mouse cursor over their player character) to see which pole is closer (N or S pointed away from the band of stars), start walking in that direction, and when they can barely see the base icon or previous beacon, drop a new beacon. From that point forward, the player can use their compass (and the band of stars) to navigate to that pole, and then follow the Beacon trail home.

While playing with a friend one can orbit in space while guiding the other to find specific locations in a Planet.

Make a habit of always placing them at your right (or left) side. That way, if you happen to become disoriented, you can always find your direction home by keeping the tether line at your left as you walk back.

If you explore underground and create multiple split paths, it can be difficult to know how to find your way back. At tether branches, if you pick up the tether that splits into different paths, the tethers connected to the oxygen source will stay blue, guiding you back to your base, or at least your oxygen source.

Every Planet has six Gateway Chambers, with the exception of the moons, which have two. Each Gateway Chamber is located along the equator in both cases, with one located at both the North and South poles of the larger Planets. This allows for easy navigation along a planet's equator by following the Gateways perpendicular to the North or South pole.