The old rover joints created all sorts of physics issues caused by the individual rover bodies flipping over, colliding with other rovers in the train, and generally just being extremely wonky. The new joints are much more rigid, allowing for more stable rover trains overall. As always, rovers are still a work in progress, and we hope to have a complete overhaul of their physics, maneuverability, and controls when we get to our 1.0 launch. Note: Rover trains are now limited to 4!

Both Steam and Xbox "Play Anywhere" users should now see a "Patch Notes" button on the home screen of their game. This first iteration will point to Excavation Update changes, but in the future this link will change dynamically and have "message of the day" type information.

This feature is a small but extremely helpful one. Currently Astroneers have three kinds of storage. Backpack space, Aux Slots (top of the backpack), and the terrain tool slots. Things like augments are useful on the terrain tool or stored in the backpack, while solar panels and small wind vanes want to be on the top of your backpack to be useful. With this new behavior, while quick stowing items, (Shift + Mouse 1) on PC (Right Trigger + X) on Xbox items will naturally try and slot to the place that makes the most sense. This should also work with items currently in your inventory, so swapping a solar panel to your aux slots should be a bit easier now!

The "infinite" power and oxygen towers in the game have been removed. They were first implemented as a "fix" for players that got lost, but their frequency changed the exploration experience in a bad way. Exploring far away from your base should be viewed as a trek that requires planning and preparation. You can still find oxygen and power on cave walls, but otherwise, plan ahead or bring a vehicle or meet almost certain death. 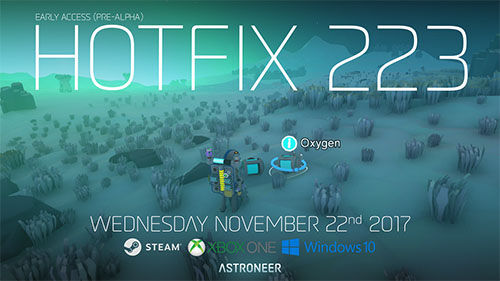