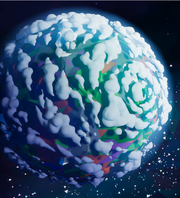 Planets are astronomical bodies in Astroneer that the player may travel to, explore and construct bases on. Moons exist as well, but they share the same characteristics as planets, and are treated as such.

There are currently five planets, with two moons. These are, starting from the one closest to the Sun,

Planets are procedurally generated upon creation of a new save, each having unique characteristics, with different types of Flora, Biomes, and Resources. Planets share the same universal resources, while all but Atrox have a Primary and a Secondary resource, which each exists on only two planets. Atrox is unique in having four atmospheric resources, with one being unique to the planet, while Desolo, having no atmosphere, has no atmospheric resources. Research Items and Samples are also different per planet, with different colors, amounts of bytes, and research times.

Planets also have unique size, gravity, length of the day/night cycle, and power generation, with some planets being better for solar power, and others for wind power.

Each planet has the same basic layout of five main layers: the surface, caves, mantle, outer core and inner core. Due to the generation of terrain, some caves can stretch from the surface to the outer core on certain planets, as well as some layers blending together without much distinction, such as on Desolo.

The Planets in Astroneer each have a type associated with them. Each type has varying differences, from the amount of sun to the types of resources that it may contain.

Landing Zones are locations on each planet that a player may land on using a Shuttle. Landing zones are marked with a sphere when viewed in orbit around the planet, allowing the player to select the zone to land in that location.

Landing Zones appear naturally at the start of the game, or from the use of a Landing Pad. If a Landing Pad is used in or near another landing zone, they may overlap and the player may have trouble selecting the proper zone to land in. Landing Pads do not have Beacons, so they may be hard to distinguish from naturally occurring Landing Zones. In multiplayer, a passenger is also able to select a landing zone to land on, not only the person in the main seat.