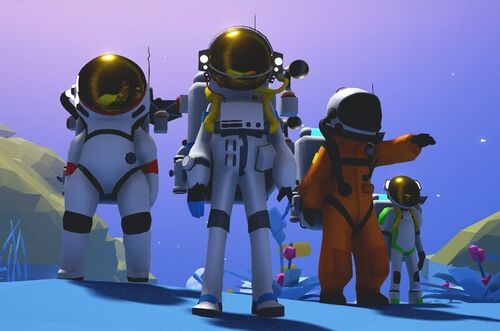 Each player can have a different look with the Customizations available in the game. There are various suits, palettes, visors, hats, masks and emotes currently available to chose from, and may be changed at will through the Customization menu during gameplay. Customizations come from either playing the game, or from the in-game EXO Outfitters shop with items purchasable with real money.

Players always start with a backpack with 10 slots, a built-in printer, and a Terrain Tool, with 3 slots, typically used for Canisters, Augments, or excess Resources. The backpack contains a built-in oxygen tank that provides up to 70 seconds of Oxygen, and Power storage that holds 10 Units. This equipment takes a very critical role in survival. The player also starts with Aero if in creative.

Players can take damage either from Hazards or by falling from certain heights. If the player sustains any amount of damage, the borders of the screen will flash red. The more red that is on the screen, the closer the player is to death. As the player regains health, the red will slowly fade. If enough damage is taken, the player will experience death.

Death can occur any time the player takes too much damage. This can be caused by running out of oxygen and suffocating, falling, defensive or offensive Flora, or taking damage from explosions, either from Dynamite, Hydrazine, or combustible Atmospheric resources. Upon death, the player will leave their Backpack with any items they had left on it, minus any explosive items that may have been set off, depending on how they died. The player will then respawn at their last used Shuttle or Shelter and may go retrieve their items, which can be found by following the death marker.