Hey editors! The Style guide has been updated, so please read through and make sure all edits going forward fit the intended style of the wiki. Any questions may be directed towards the admins. 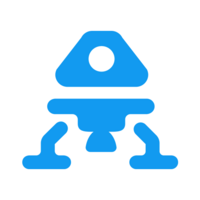 Shuttles are a type of vehicle in Astroneer. They allow the player to travel to different Planets within the Astroneer solar system. There are three different sizes of Shuttle which the player can create:

Shuttles need to have either a

Solid-Fuel Thruster or a

Fuel is used for the following:

Landing on a planet is free, and requires no fuel.

Solid-Fuel Thrusters have 4 uses, and will break on the fourth use. This will be enough to travel to a single planet and back (2 takeoffs, 2 travels).

Hydrazine Thrusters have up to 24 uses, requiring the use of

Hydrazine in one of the 3 fuel slots. Each canister of Hydrazine gives 8 uses. A full load of Hydrazine therefor is enough for 6 return trips (6*4 = 24).

To enter the shuttle, press the Use key (PC:

To take off, press one of the context keys (for PC:

Clicking on another planet will then launch the player to that planet and show the orbit view.

Players on console will need to activate the cursor in order to select a landing zone or planet to travel to.