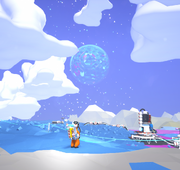 Tundra is one of the Planets in Astroneer.

Tundra is similar to the Terran starter planet, except much colder and hence covered in snow and ice. They can consist of flat plains and tundras or large mountains and winding hills. Wind turbines are recommended on this planet due to the naturally windy conditions, which may also cause storms to appear more frequently. Although the longer day/night cycle renders solar panels less valuable they are not a bad idea for all day power.

You need Titanite or Hematite? This is the best planet for that purpose. Update 0.10.2.0

The average time it takes for a day/night cycle to pass is around 20 minutes.

On this planet there are sections of short upside down cone shaped pillars, which will often have research items on the top.